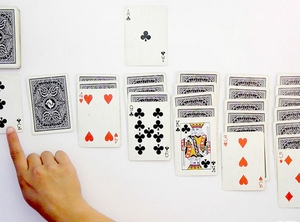 Solitaire is a very popular card games that attracts millions of people from all over the world. This game was designed so it can be played for a single player and it uses the standard deck with 52 cards. Playing the game is simple as it requires you to have some minimum knowledge about the rules. The game can be restarted by shuffling the cards when you get stuck. At the same time it managed to gain an additional popularity the moment when computer was introduced and this game became quickly a very good way to spend a few minutes in a pleasant way, while being a the office.

Just like any card game that reached a worldwide recognition, it managed pretty fast to have different variations. Right now you can probably find hundreds of different solitaire versions. While most of them will keep the core concepts, there will be a few small differences in the rules that can change the game drastically. Each of these games will have its very own specific rules and this means that you have to do different things in order to become a winner, apply special strategies.

Here is the short review of some of the most popular solitaire versions:

Klondike – This is by far one of the most popular version of solitaire and it holds many names. This is the very same solitaire game that you can find on almost any Windows PC and it has been around us for many tens of years now. The Klondike solitaire version is easy to play compared to the other versions and your mission there is to build your foundation piles by using the cards in the stockpile or those coming from the deck of cards.

Spider – One of the main differences between Klondike and Spider Solitaire is the fact that the first one uses two deck of cards. There are 10 columns here and there is a deck of cards from which you can get new cards and they will cover each of the 10 columns with one card. This game is also featured at some of the newer versions of Windows and it’s even more captivating than Klondike as it’s more entertaining.

Pyramid – Is another challenging solitaire version. The game has 1 player, it’s played with a standard 52 card deck and your goal is to remove all the cards from the pyramid.

In order to get familiar with the rules of the many solitaire variations, it’s always best that you try them out on the internet and this way it’s a lot easier to understand how to play them.

<- The benefits of playing Solitaire Learn how to play Solitaire Klondike correctly ->
Login
The e-mail address or password you entered was invalid.
Сlose